The Alcazaba is one of the most emblematic points of touristic interest in the city of Almeria and one of the most important Muslim archaeological evidence in the Iberian Peninsula.

This artistic symbol of Almeria is a Moorish palace which the first caliph of Al Andalus Abd al-Rahman III ordered to built in 955 on the ruins of an older fortress.

The enclosure has three distinct parts. The first two of Moorish origin and the third of Christian origin:

The first enclosure was an old cemetery and contained homes, although today it is formed by Arabic style gardens.

The third enclosure is a Christian castle, that after the capture of the city in 1489, the Catholic monarchs ordered to build.

Finally, we should mention that the views of the city and the harbor from the top of the walls of the Alcazaba are spectacular. 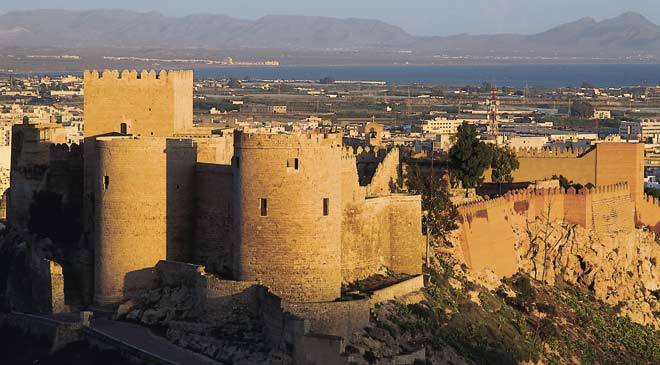 Los refugios de Almeria are a set of underground tunnels that served to protect the population of the bombing of the Spanish Civil War.

Constitute one of the engineering and architectural most important made during the twentieth century in Andalusia and have now become the largest shelters in Europe open to the public.

The Cathedral of Our Lady of the Incarnation in Almeria built between 1524-1562, is unique in its kind, since it is a cathedral-fortress of the seventeenth century Gothic and Renaissance style.

Surprises visitors because of its dual defensive enclosure to the outside of great austerity and beauty highlighting houses inside the sacristy, equipped with a bright decor with remarkable medallions and entablature.

Visiting hours of the temple is from Monday to Friday from 10 to 13 hours and 16-18 hours. General admission is 2 €. They have guided tours.

Alquife of Almería, is an iron ore loading facility. It is an example and a masterpiece of iron architecture of the early twentieth century.

The Cable Inglés is on the beach of Almadrabillas in the Park Almadrabillas and close the monument dedicated to the people of Almeria who were exterminated in Nazi Concentration Camps is located. In 1998 he was declared of Cultural Interest in Andalusia and today is one of the symbols of the city of Almeria. 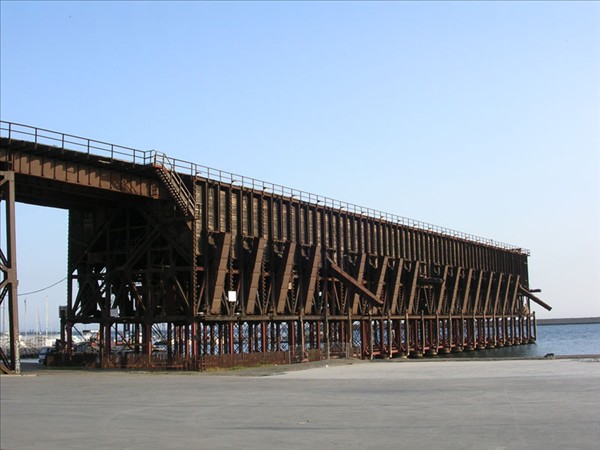 A house-farmhouse where the splendor of the world of film is remembered. A House-farm dating from 1866 built on the outskirts of the city, remodeled and enlarged in the twentieth century, and its first inhabitants the Balmas family and descendants.
The museum, which opened on January 15, 2011, is located in the so-called Cortijo Romero, also known as Finca Santa Isabel, House Balmas or Casa de la Torre, during the 1960s and 70s many stars of Hollywood stayed, as Peter O'Toole and Yul Brynner, directors like David Lean, Sam Spiegel, Sam Wanamaker and Rainer Werner Fassbinder or singers like John Lennon and Ringo Starr.
The movie house has 5 different rooms each for the enjoyment of visitors.
ROOM 1. The visitor will find the entrance hall of the mansion, stay regain the splendor of their best days, the decor of soil, wood paneling on the walls, a stately air to talk about the original intention with which he decorated this room, a space where we find the patriarch of the house that we will receive before a majestic fireplace, an emblem of the house. 2. SALA and enters the exhibition and musealized space and visitor impact to a hologram which presents each of the characters that have passed through the house. 3. SALA exhibition area dedicated to raising awareness of the cinematographic past of the province. ROOM 4 (Years 60 and 70) In this area an overview of the characters who lived in the house, which was a source of inspiration or passed any season is observed. SALA 5. (John Lennon) In this room evoke the figure of John Lennon in which it was originally his bedroom when he was in the house in 1966, during the making of the film "How I Won the War" in a emotional approach to this universal musician.
A journey through time which highlights its bed (fully functional and modern style Lennon) and bathroom where ex-Beatle created the composition "Strawberry Fields Forever". In the living people, objects and places that had some meaning for the composer at the time, and especially its relation to recreate Almería.